Five years ago today (12/2/13) Marriage Equality went into effect with midnight ceremonies at the Waikiki Sheraton’s Leahi Club. At a midnight a community ceremony co-sponsored by the LGBT Caucus of the DPH a total of 37 couples tied the knot thanks to the generosity of the Waikiki Sheraton and the hospitality of then General Manager Kelly Sanders. We hope that each and everyone of you will take a moment today to celebrate and to honor this huge step forward in the fight for justice and equality. 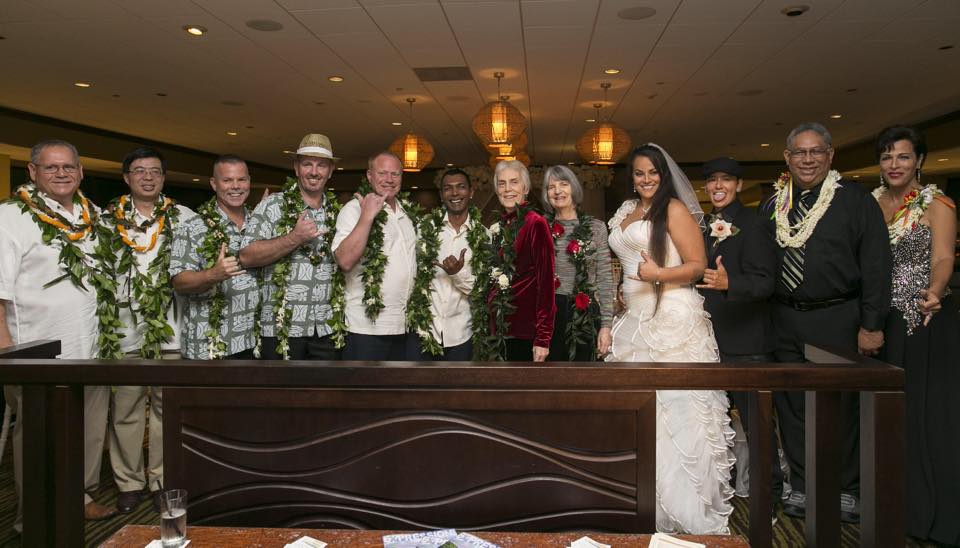 The 6 couples that were chosen to symbolize the struggle and
how everyone was impacted by this amazing feat.

As the LGBT Caucus has shown since 2013 (i.e. passing the transgender birth certificate law, banning conversion therapy & our 2019 Legislative Priorities listed below) we all still so have so much more left to do to ensure justice and equality is a reality for everyone. So we hope that you will think about making a donation to the LGBT Caucus so that we have the resources for the battles ahead.

Reminder December LGBT Caucus Meeting is set for December 15 at 10 AM and it will be a panel discussion about changing the LGBT Caucus’ name to SOGIE (Sexual Orientation, Gender Identity and/or Expression). Panel members to be announced soon.

If you missed Be The Change: Becoming a Foster Parent you can watch the video by clicking here.

Briefing: Update on the 2022 DPH State ConventionMonday, October 4 at 6:00 pmMake sure you register to attend the briefing.Reminder deadline for submissions for the Logo Contest is October 15, 2021 - mailchi.mp/90fc46109b1f/briefing-update-on-the-2022-dph-state-convention-logo-contest ... See MoreSee Less

Join Chair Jaime Harrison and other Democratic leaders for a virtual grassroots event to celebrate National Voter Registration Day 2021 (September 28)! We will highlight how the Party is protecting th...
View on Facebook
· Share

Ten years ago today, we repealed ‘Don’t Ask, Don’t Tell.’ Today our military is stronger and our country is safer because patriotic Americans no longer have to live a lie in order to defend the country they love.The repeal of ‘Don’t Ask, Don’t Tell’ allowed these two Marines to be true to themselves while serving in our military. Listen to their story: www.obama.org/story/two-marines-love/ ... See MoreSee Less